If you've got a question, we've got an answer. Find some questions & answers below. 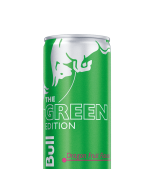 What are the Red Bull Editions?

One 250 ml can of Red Bull Energy Drink contains 80 mg of caffeine, the same amount as in a cup of coffee. The European Food Safety Authority (EFSA) concluded in 2009 that the ingredients of energy drinks are of no concern. In 2015 and 2017, the EFSA confirmed the safety of energy drinks and their ingredients.

All ingredients of Red Bull products are labelled on the can.